What's the difference between using the tense markers "e...ana" and "kei te" in Te Reo Māori? This is a question that comes up quite often in Te Reo Māori groups and classes. In this post I look at the two options and compare how they are used.

In my previous post on types of verbs I noted that "e...ana" and "kei te" are both "present tense, continuous action" tense markers.

The "present tense" part means that the verb being performed is currently happening now. If I say "I am running", that means I am currently running at this moment in time.

This is a summary of my thoughts on usage of "e...ana" vs "kei te" in my own usage of Te Reo Māori, from information obtained from books and classes. I follow this with details of what some grammar books say on the subject.

In practice I generally treat "e...ana" and "kei te" as being interchangeable. They have the same meaning to the listener. The following are equivalent:

Different iwi prefer one usage over the other. Depending on the dialect of Te Reo Māori you're learning, or the area you reside, you'll probably hear "e...ana" more often than "kei te" or vice versa. You might like to prefer to use one of the two tense markers over the other if you want to stick to the dialect or regional variance of the reo you are learning.

Tense markers in Te Reo Māori indicate an action occurs at a particular time. The time that the action occurs can be "absolute" or "relative".

A tense marker that operates in "relative" time occurs at a time already established by another tense marker or time setting statement. It makes no change to the current time where the action occurs, other than to state that this action follows any previous action.

"E...ana" is used in additional ways that "kei te" can't be used. Harlow gives three examples in the section I quote below.

What do Te Reo Māori reference books say about the two different tense markers? I looked through a few of the books I have at hand and the following is some of what they have to say.

John C. Moorfield has this to say about the two tense markers in the book "Te Kākano":

John Foster in "He Whakamārama" says:

Note that "E...ana" can be translated as past, present or future tense (is, was, will be), according to the context of the story.

Bruce Biggs in "Let's Learn Māori" refers to "kei te" and "i te" as "pseudo-verbal continuous:

with the same meaning as the continuous tense formed with "e...ana", and conveniently translated by the "-ing" tense in English.

The pseudo-continuous is an extremely common construction in the eastern dialect area where it largely replaces the "e...ana" tense of the western dialect area, which includes North Auckland and all of the North Island west of the Central Plateau and ranges.

Ray Harlow in "A Māori Reference Grammar" goes into quite a bit more detail (p. 52):

Like "ka", the combination of the preposed particle "e" and the postposed particle "ana" does not express tense; it is not present, or past or future. Rather it indicates the ongoing or progressive nature of an event or state, and is thus called progressive. When used by themselves with no indication of time, these particles usually refer to the present.
....
However, this two particle construction can equally well be used in contexts referring to the past or future, and simply indicates the ongoing nature of an event or state of affairs.

"Kei te" is used for the present and future and "i te" for the past."
...
In meaning, "kei te" and "i te" are thus similar to "e...ana", and the two patterns are interchangeable in many cases. There are however three constructions where "e...ana" seems to be preferred."

Harlow lists these three constructions as:

Winifred Bauer in "The Reed Reference Grammar of Māori" says:

... "e...ana" is a relative tense marker: the time reference is derived from the context. With no context, "e...ana" is usually interpreted by Māori consultants as present, as in (621), but can equally well be future as in (622) or past as in (623) if the context specifies. Its default reading, however, is present. "E...ana" also has an aspectual value: it marks events as incomplete and on-going at the time specified by the context. (624) shows the "e...ana" can occur in habitual contexts and (625) that it can occur with stative verbs, so that in Comrie's terminology, "e...ana" is imperfective. This reflects the fact that it occurs in a wider range of contexts than "kei te" and "i te".

"Kei te" is also absolute, but marks non-past. It is found in both present (605) and future (606) contexts. It is interpreted as present by Māori speakers when there are no indications of the time reference in the surrounding context. Like "i te", it also marks continuous aspect: (607) shows "kei te" used with a stative verb.

These are the example sentences that Bauer references above:

Use "kei te", "e...ana" or both as you prefer. They'll be treated as equivalent by listeners. Follow the advice of your whānau, Te Reo teacher or learning material as to which to use so you can remain consistent within the dialect or region that you are learning. Keep the academic information above in mind as a means to learn about the deeper meaning of the tense markers but try not to stress over which is right or wrong. It's more important to use Te Reo Māori, no matter if you are making mistakes or not.

Sign in or become a Stranded member to join the conversation.
Just enter your email below to get a log in link.

I read an article recently titled "The New Old Way of Learning Languages". The article outlines a method of learning languages that involves reading texts in the target language with a literal translation of the text immediately below it in a language the reader knows. 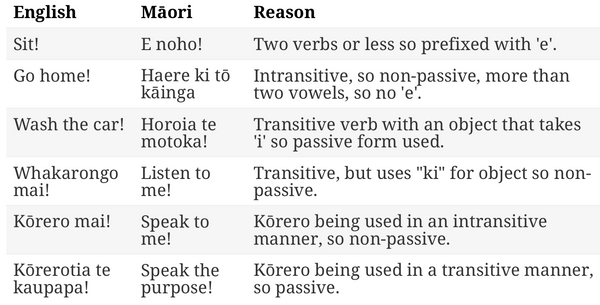 I often see questions online about why some commands in te reo Māori have a particle "e" before the command, or why some commands are in a passive form and some are not. This post is my understanding based upon my class notes of why you choose one form over the other.